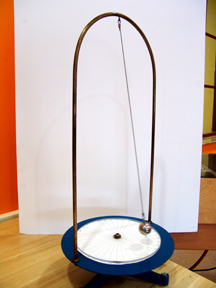 If a pendulum is suspended so that it may swing freely, it will maintain a constant plane of oscillation, relative to an inertial frame of reference. This is the result of the force which act on a pendulum. These forces act in the direction of the path of the pendulum and along the string. There is no force acting perpendicularly to the path of the pendulum. If a pendulum were suspended at the north pole of the earth, it would continue to oscillate, unperturbed, in it’s original plane of motion, while the earth revolved beneath it, making one revolution in twenty-four hours. To an observer on the earth at the north pole, who is unconscious of the earth’s rotation, it will appear the the pendulum’s plane of motion is constantly changing, completing 360 degrees of rotation in twenty-four hours. This horizontal rotation will appear to be in the opposite direction of the earth’s rotation, that is, in the clockwise direction. At the equator, no such rotation takes place. At a point between the pole and the equator, the period of this rotation varies between twenty-four hours and infinity, depending on the latitude. In Madison the period is 35 hours, 8 minutes, 8 seconds. In 1852, Leon Foucault suspended a pendulum from the dome of the Pantheon in Paris. This pendulum, now known as the Foucault Pendulum, showing the apparent rotation of a pendulum’s plane of oscillation.