Sir William Crookes invented this type of radiometer in 1873 while he was studying the element thallium.

The radiometer is a glass bulb with a partial vacuum, which means that there is very little air left inside the glass bulb. A rotor with four light weight metal vanes is mounted on top of a spindle so that they are free to rotate with very little friction. Each metal vanes has a reflective surface on one face, that is either shine or white. While the opposite face is a light absorbing surface which is black. When the radiometer is exposed to light (ie. Heat) the rotor of the radiometer rotates. Many scientists, including Einstein worked on a quantitative explanation of the radiometer’s behavior.

What do you notice about the metal vanes of the radiometer?

Answer: Each vane has a black face one side and silver/white on the other.

Which direction do you think the vanes of the radiometer rotate?

Answer: Depending on which properties of physics you consider you could guess either direction!

Let’s Try It And Find Out! 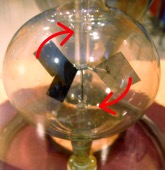 So, which direction does the vanes rotate?

How does the radiometer work

When the radiometer is exposed to light the vanes are subjected to a continuous bombardment both by photons (the quanta of light), and by the molecules of the gas contained in the bulb.

The shiny side photons bounce off the shiny side of the vane transferring (almost) twice their momentum,  and almost no energy. Think of a pin-pong ball colliding with a bowling ball. Similarly the recoiling atoms of the vane provide the momentum for the reflected photon without acquiring much energy.

The average of the sum of all momentum transfers over time is equivalent to a pressure exerted by the radiation.

The mill rotates with the shiny side toward the incoming light, therefore the radiation pressure, although it exists, does not explain the behavior of the radiometer.

Gas molecules bounce off the atoms of the vane, the energy of the reflected molecule  depends on the velocity and direction of the individual  target atom in the vane.