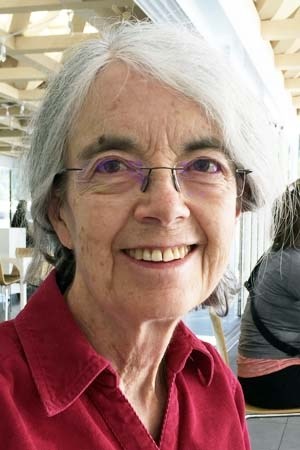 Thoughts and memories about Bernice Durand from her colleagues are compiled below. Bernice passed away February 7, 2022.

If you would like to contribute your thoughts, a story, or anything in memory of Bernice, please email Sarah Perdue (saperdue@wisc.edu).

Bernice was a personal friend and supportive colleague. She was a leader in gender equity at UW. She was also an innovator in education – at one point she invested in professional  videography of her lectures and set up her course with students watching lectures on TV so she could spend her time with them personally in her office rather than just repeat the drill. These were pre-internet days and pre-active-learning models. I remember with fondness her attending in some pretty outrageous costumes Halloween parties I used to throw.

We lost a dear colleague, mentor, and friend, Prof. Bernice Durand. Her kindness, generosity, and integrity made a tremendous impact on our academic lives. I took her Special Topics course at UW-Madison during my graduate study. Bernice served as a mentor for my wife Prof. Dandan Sun at the UW Women’s Faculty Mentoring Program.  R.I.P. Bernice!

Bernice was always welcoming and collegial. She suffered of polycystic kidney disease and lived with a transplanted kidney. When she heard that my father was killed by the same disease, we talked at length. She made me aware of the work of the Polycystic Kidney Disease Foundation, so that I would contribute to the Foundation, and address relatives affected by the disease to this very useful resource. I will never forget her openness and kindness in talking about this painful topic.

I worked closely with Professor Durand with a 10% appointment in the provost office while she served as the Vice Provost for Diversity & Climate. I helped her select and appoint people to the Diversity oversight committee as well as run the meetings. During that time there had been some disparaging comments about the Hmong community. We were instrumental in organizing engagement with Hmong community leaders and students as well hosted Hmong speakers and displayed several Hmong batiks.

She was passionate about diversity and really wanted to improve representation on campus for people of color and women in the sciences. I am grateful for the time I spent working with her. And, I also got to know Randy during that time. The love and respect they had for one another was on display everyday. I loved being around them. She made an impact on my life and will be missed.

It was 1989 and I was one of Bernice’s students in Physics 107. I was never attracted to math or physics, but Bernice created the conduit to the larger universe. It was in that course that I learned to appreciate the work that physicists do to connect the very small (quantum physics) and the very large (cosmology). It was through her course that I read one of my most favorite books of my youth, ‘A Brief History of Time’ by Stephen Hawking.

I stayed at the University and as I worked on my graduate degree in education, I was also the video producer for her televised course. What ended up as 42 one-hour lectures was the result of hundreds of hours of recording Bernice in the classroom, in the studio, in her home, in Aspen, in her office, and at any location that helped her talk about the everyday application of physics in our world. She often heard from students that, “I feel I know you so much better because you let us into your world in ways that other professors don’t.”

I know what those students meant. I was allowed into her world as well. As part of her approach to teaching physics in an accessible way, I watched her ice-skate, play piano, do laundry, and nurture her crocus flowers…all to talk about physics. I watched her interview some of the world’s most renowned and Nobel-winning physicists and joke with them like they were buddies at the bar. If you teach, I hope that you’ll let students into your life and into your work in that same way that Bernice did.

Just before she retired, my wife and I had dinner with her and Loyal. She gave me a copy of ‘Einstein’s Dreams’ by Alan Lightman. In it, she thanked me for the work that I did on Physics 107 and congratulated me on getting my graduate degree. The book still sits prominently on my bookshelf. I’ll miss you, Bernice. Thank you for being an inspiration in my life and for helping me connect the very small with the very big.

I am saddened to hear about the passing of Professor B. Durance. I would like to give my sincere condolences to Prof. L. Durand and his family and the Physics Department.
After many years of being so far away from Madison, I came back to work for the State of Wisconsin Investment Board. The first thing I did was to take a tour of the Physics department filled with fond memories and great sense of pride to have been part of this great institution. I will always remember Prof B. Durand when I took a course in topology and physics in early 1990s which was one of the most enjoyable courses I ever took in physics. I still remember the days I used to spend in her office discussing everything from my personal interests, life, and physics. She always exuded a sense of inspiration and hope. She will be missed dearly.

I was very sorry to hear that Bernice had passed away. She was my major professor in the early 80’s. I feel indebted to her for getting me started on a great path to a very fulfilling career in physics research. She always put her students’ needs first. My wife and I moved back to Wisconsin a few years ago and went back to the physics department hoping to visit Bernice and Randy. Unfortunately, for us, they were no longer there, but the visit brought back some good memories. I still have the graduation present Bernice gave me, and fondly remember our discussions of my research project. I was very lucky to be able to study under her, and earn my doctorate.