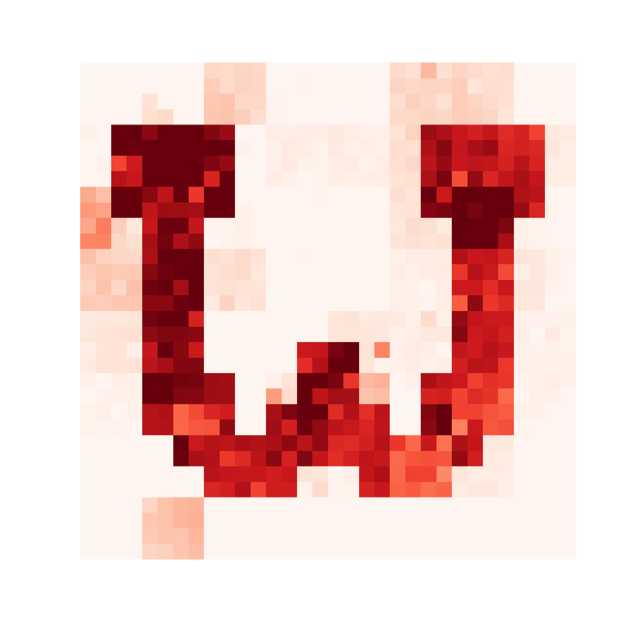 Each colored square corresponds to a pixel in the camera.  The camera has 1024 pixels, each sensitive to single photons with time resolution of one billionth of a second.  The full camera weighs several hundred pounds and measures five feet across.  The image was created in the laboratory in Chamberlin Hall by flashing a light emitting diode at the camera, with pixels surrounding the W electrically suppressed by operating them at low bias voltage.  The color scale indicates how many photons were detected in each pixel, with the darkest red pixels corresponding to the most light.  The actual photons that were detected are blue.  The pixels have not yet been calibrated, which is why some artifacts are visible.  The camera will be installed on a prototype telescope at the Fred Lawrence Whipple Observatory, where it will detect flashes of light produced by very high energy gamma rays produced in astrophysical sources and colliding with Earth’s atmosphere.  The prototype Schwarzschild Couder Telescope for the Cherenkov Telescope Array is supported by a Major Research Instrumentation grant from the National Science Foundation, award #1229792.  Image credit: Colin Adams, Thomas Meures, Justin Vandenbroucke, Physics Department.

A short video describes the project and details UW’s involvement.

Ten University of Wisconsin–Madison scientists are involved in designing and testing the LZ detector, and are part of a team of more than 200 researchers from 38 institutions in five countries working on the project. This month, the Department of Energy approved proceeding with the final stages of assembly and construction of LZ at the Sanford Underground Research Facility in South Dakota, with a total project cost of $55 million.