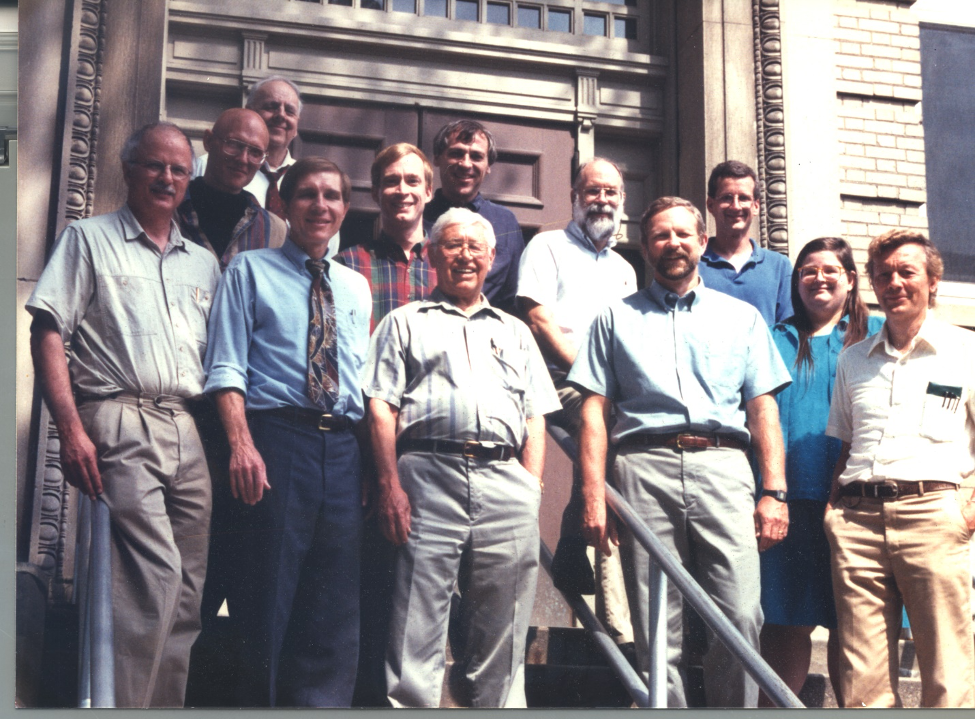 Born and raised in Neenah, WI in 1926, Professor Webb earned his both his bachelor’s (’50) and doctoral (’56) degrees from the UW–Madison Physics Department. After graduating, he went to work at General Electric Research Laboratory as a staff scientist. In 1961, he returned to UW–Madison as a tenured Associate Professor of Physics.

Barney served as Department Chair from 1971-1973, taking the reins of a department that had been traumatized by the 1970 Sterling Hall bombing. In 1977, he was named chair of the University Committee, the Executive Committee of the faculty and the most important and visible manifestation of faculty governance at UW–Madison. From 1985-1990, he served as Chair of the UW–Madison Athletic Board. He was an Emeritus Professor with the department since his retirement in 2001.

Remarkably, Barney was as prominent in the scientific community as he was on campus. His research interests included surface physics, low-energy electron diffraction, and scanning tunneling microscopy. In 1987, he was awarded the Davisson-Germer Prize in Atomic or Surface Physics from the American Physical Society “For his contribution to the development of low-energy electron diffraction as a quantitative probe of the crystallography defect structure, and dynamics of surfaces.”

Several UW–Madison colleagues recently reflected on their time with Barney.

“It is particularly notable that during Barney’s career, the big industrial research labs (Bell Labs, IBM, Xerox) dominated at the cutting edge of research in condensed matter and surface physics — Barney’s specialties. Compared to a university professor, their research staff members had vast resources available — not only financially but also via interactions with expert in-house colleagues. Despite the odds, Barney kept up with them by devising clever experiments and building most of his equipment together with his students.”

Current materials science and engineering professor and former student of Barney’s, Max Lagally, recalls, “What always scared me is when Barney started saying ‘I don’t know anything about this, but…’ and then proceeded to demonstrate that he knew all about it.”

Emeritus Professor Louis Bruch noted that Barney’s competitive edge carried over to interests outside the lab. Bruch says, “He was a competitive gardener, for instance on the question of first ripe tomatoes and last ripe strawberries.” And Professor Pupa Gilbert recalls, “Barney had a terrific sense of humor, and was an intrepid cyclist for most of his life. As he aged, he said that uphill roads ‘got steeper and steeper,’ so he stopped biking on them.”

Professor Mark Eriksson says that Barney was a great mentor and role model, always understated about his own accomplishments, and always willing to offer advice when asked.

“This was certainly true throughout my time on the faculty since 1999, when Barney was supportive and encouraging from day one. But it was true for me far earlier than that. At 9am on February 28, 1987, I met with Professor Webb in his office. He had agreed to talk to my father and me about choosing an undergraduate college, since I was interested in physics. I was a 17-year-old high school junior from Madison LaFollette. Barney didn’t know either my father or me, and the 28th was a Saturday. None of that mattered, and he was happy to take the time to talk with us. When I joined the faculty years later, I of course remembered that conversation, and so did he.”

Professor Bob Joynt says, “I probably had lunch with Barney 4000 times over 30 years, the last time when he was 92 and still coming in pretty much every day. He was the same age as my father. However, he was not a mentor but a protector. He shielded me every day from everything that is boring in life – he was a person always interested in everything and approached it all with the most lively intellect.  I never remember a moment in his company that was not absorbing and fun.”

Tributes and stories from Barney’s students and colleagues have been compiled here.

Barney’s obituary with Cress Funeral Services can be found at https://www.cressfuneralservice.com/obituary/Maurice-Webb.