The Ingersoll Physics Museum and Steve Narf were featured in an article about museums and special collections within the College of Letters & Sciences.

Last week, crews at the Sanford Underground Research Facility (SURF) in South Dakota strapped the central component of LUX-ZEPLIN (LZ) – the largest direct-detection dark matter experiment in the U.S. – below an elevator and s-l-o-w-l-y lowered it 4,850 feet down a shaft formerly used in gold-mining operations. At UW-Madison, the experiment is led by Physics Prof. Kim Palladino. 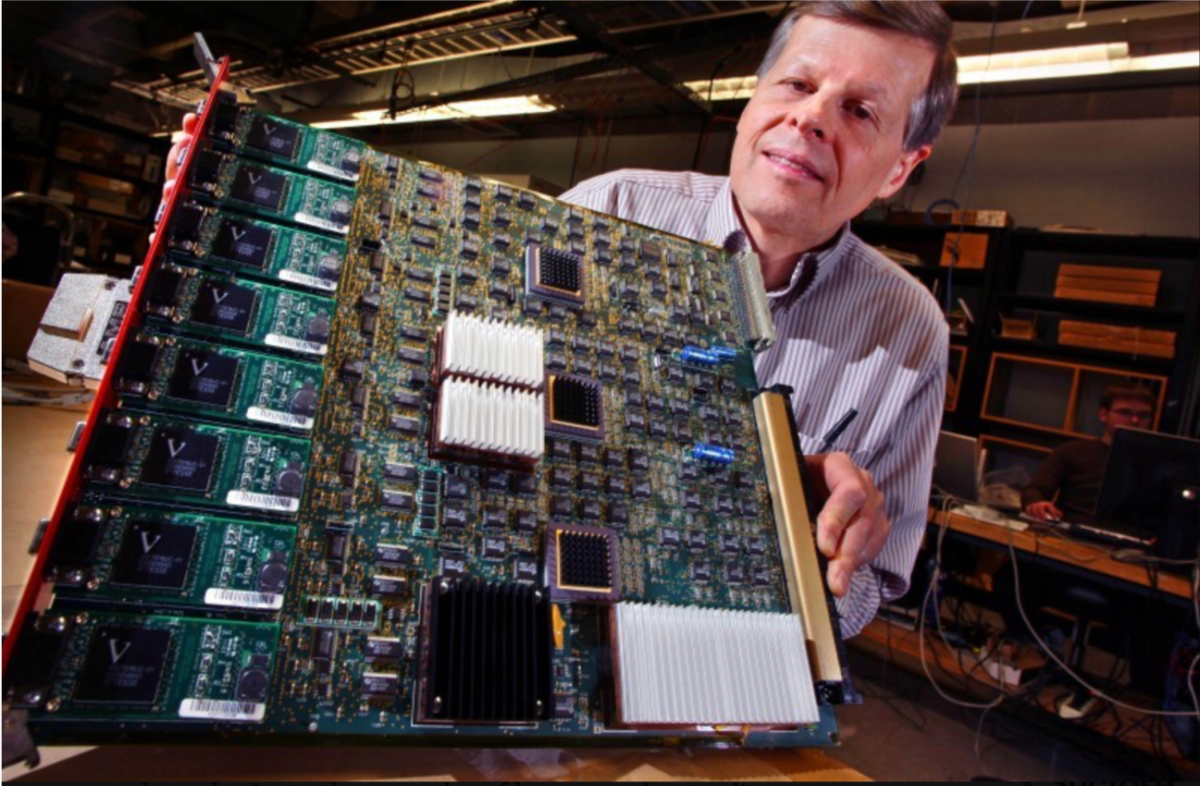 The Panofsky Prize recognizes “outstanding achievements in experimental particle physics,” and is the top APS award in that field.

Smith developed systems that enabled the discovery of the Higgs boson, a previously elusive particle believed to give mass to all matter. Smith led a team of over 100 scientists on the CMS experiment trigger system that captured the data for the Higgs’ discovery at the Large Hadron Collider (LHC) in Geneva.

“In the experiment at the LHC, proton beams collide 40 million times per second, and each time the beams cross, detectors record a snapshot. That’s over a megabyte of data, 40 million times per second. You can’t store it all,” Smith explains. “The problem is, one in 10 trillion of those collisions actually has a Higgs in it, and you don’t want to lose any of them. So how do you do this?”

To sift through the enormous amount of data, Smith and his team developed a triggering system. The two-step mechanism quickly filters through the first set of data, using high speed electronics to take one billion collisions per second and identify interesting patterns in up to 100,000 of them. Then, the second step uses thousands of computing nodes to filter the data down to 1,000 collisions per second — a reasonable amount of data that can be stored.

“We designed a large amount of electronics that runs incredibly fast, and it had to be programmable and flexible because we didn’t know what we were going to find,” Smith says. “We’re basically throwing out 99.9999% of the data, and keeping a tiny fraction where all the physics has to come out.”

Smith, who had previously led a team charged with a similar task for the Zeus experiment in Hamburg, Germany, was asked to lead the CMS triggering team in 1993. The Higgs was discovered in June 2012.

Even though a major goal of the CMS experiment was realized, physicists have much left to learn about the Higgs, which means studying more Higgs events. Continuing plans for the experiment, set to go online in the mid-2020s, involve increasing the amount of proton collisions by a factor of 10, resulting in 10 times more data per second. As Smith was finishing his career, he worked on the initial prototyping for an even more advanced triggering system to filter through larger data sets.

“This award means a great deal to me because it’s the recognition of my colleagues, of the team of people who contributed, and because it recognizes this particularly challenging area of detector development and particle physics experimentation which had to be solved in order to do physics at the LHC,” Smith says.

UW–Madison physics department chairperson Sridhara Dasu, who trained with Smith before beginning his faculty position, nominated Smith for the award.

“Professor Smith is recognized as the world-leading expert in the design, construction and operations of the trigger electronics system for hadron colliders,” Dasu says. “The trigger system is at the very heart of particle physics experiments, requiring the very best talent. Professor Smith is the leader in training those best experimenters.”

The second annual Chicago Quantum Summit, hosted at the University of Chicago, will engage scientific and government leaders from around the globe and the industries that will drive the applications of emerging quantum information science research. With a focus on building international community, these experts will discuss the future of quantum information science and technology and strategies to build tomorrow’s quantum workforce.

Shimon Kolkowitz, a University of Wisconsin–Madison assistant professor of physics, has been selected as one of 22 members of the 2019 class of Packard Fellows for Science and Engineering.

The fellowship, awarded to early-career scientists from across the U.S., provides $875,000 of funding over five years. Kolkowitz will use the funds to develop his research program in ultra-precise atomic clocks, which he will use to investigate such fundamental aspects of physics as the relationship between quantum mechanics and gravity and the nature of dark matter.

The Physics Board of Visitors, their families and friends visited CERN, Geneva, to learn about the department research activities there. Professors Sau Lan Wu, Cary Forest and Sridhara Dasu hosted them. Thanks to Sylvie Padlewski and Aimee Lefkow for help organizing the event.

All prospective undergraduate Physics majors are invited to attend our Physics Major Fair on Thursday, Oct 17 from 4:30-5:30pm in the Physics Museum. Connect with facutly + current undergrad majors, learn about our clubs and student orgs, and eat tasty treats.

As the field of quantum computing grows, American Family Insurance and the University of Wisconsin–Madison’s Wisconsin Quantum Institute (WQI) keep pace, announcing plans to work together in partnership to expand quantum computing research at UW.

American Family’s new relationship with WQI is part of the company’s ongoing partnership with UW–Madison supporting students, academic programs, research, athletics and charitable activities. This endeavor will help to attract top graduate students to UW–Madison and will fund a campus seminar series that brings leaders in the field to Madison. In turn, WQI researchers will collaborate with American Family researchers.