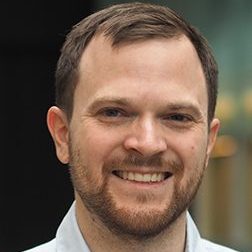 On January 1, assistant professor Moritz Münchmeyer joined the UW–Madison physics department. He specializes in theoretical and computational cosmology. His research combines theoretical investigation, the analysis of data from different observatories, and the development of machine learning techniques to probe fundamental physics with cosmological data. He joins us from the Perimeter Institute for Theoretical Physics in Waterloo, where he was a Senior Postdoctoral Fellow. To welcome Münchmeyer to the department and to learn more about him and his research, we sat down for a (virtual) interview.

What are your research interests?

I work at the intersection of theory and observation in cosmology. On the one hand we have the mathematical theories of how the universe works, and then we have observations made by telescopes and detectors. The universe, of course, is incredibly complicated. There are many forces and particles and radiation that all interact with each other. And that makes it often hard to go from observational data to the theory that you’re interested in. We want to know, for example, what were the laws of physics in the very early universe? Or how does the universe evolve? And so, I develop new methods to use the data to probe the theories.

One thing that I’m very excited about now is using techniques from data science and machine learning for cosmology. As everybody knows, there’s a machine learning revolution going on which is having an impact on many fields, including cosmology. But the techniques in machine learning are often developed to do things like object recognition in images. They do not necessarily work well for the kind of data that we have, which has very different properties and is described by physical theories. So, I’m trying to adapt these machine learning techniques, or find new ones, that are specifically suited for the problems of cosmology.

I also work on new theoretical ideas to use observational data. There will be a huge influx of new cosmological data in the next decade: many experiments are being built and they are often much better than previous experiments. We’ll get amazing new data of the universe and I’m thinking about how to use this data to learn more about fundamental physics, for example by combining different data sources in new ways that have not been explored before.

What is the source of the data you use in your research?

When I started in cosmology, I became a member of the Planck satellite collaboration, which was a Cosmic Microwave Background (CMB) experiment. Many of the best measurements of cosmological parameters, such as the age of the universe, come from Planck. Of course, now we are building even better CMB experiments, such as the Simons Observatory which I am a member of. In about two years it will start to take precision measurements of the radiation from the early universe. I am also a member of the CHIME experiment, which is detecting Fast Radio Bursts, a new exciting source of data for cosmology and astrophysics. In Madison I am looking to also become involved with Vera Rubin Observatory, one the major upcoming galaxy surveys, which can be combined with CMB experiments. Prof. Keith Bechtol in the physics department is a leading contributor to this experiment. As a theorist, I am not involved much in the data taking process, but once the data is taken, my group will work on its analysis with the methods we have developed.

Once you settle into your new role here, what are the first research projects your group will start on?

The broad subject we’ll work on is to learn about the initial conditions of the universe from CMB and galaxy data. We will develop new statistical tools and machine learning methods towards this goal. We will also think about new ideas to use cosmological data, such as the Fast Radio Bursts I mentioned before.

What hobbies and interests do you have?

I have a family with two young children, so I like to go on adventures with them. I also play piano, especially to get my mind off physics. My current favorite sport is Brazilian Jiu-Jitsu. I’ve also always been interested in entrepreneurship. A few years ago, I co-founded a small company, Wolution, which uses machine learning — not in cosmology, but for image analyses in bio sciences, agriculture, and other fields.

My favorite elementary particle is the photon, because it’s extremely versatile: the entire electromagnetic spectrum, like radio waves and x-rays and of course visible light. All the experiments I mentioned above fundamentally detect photons.