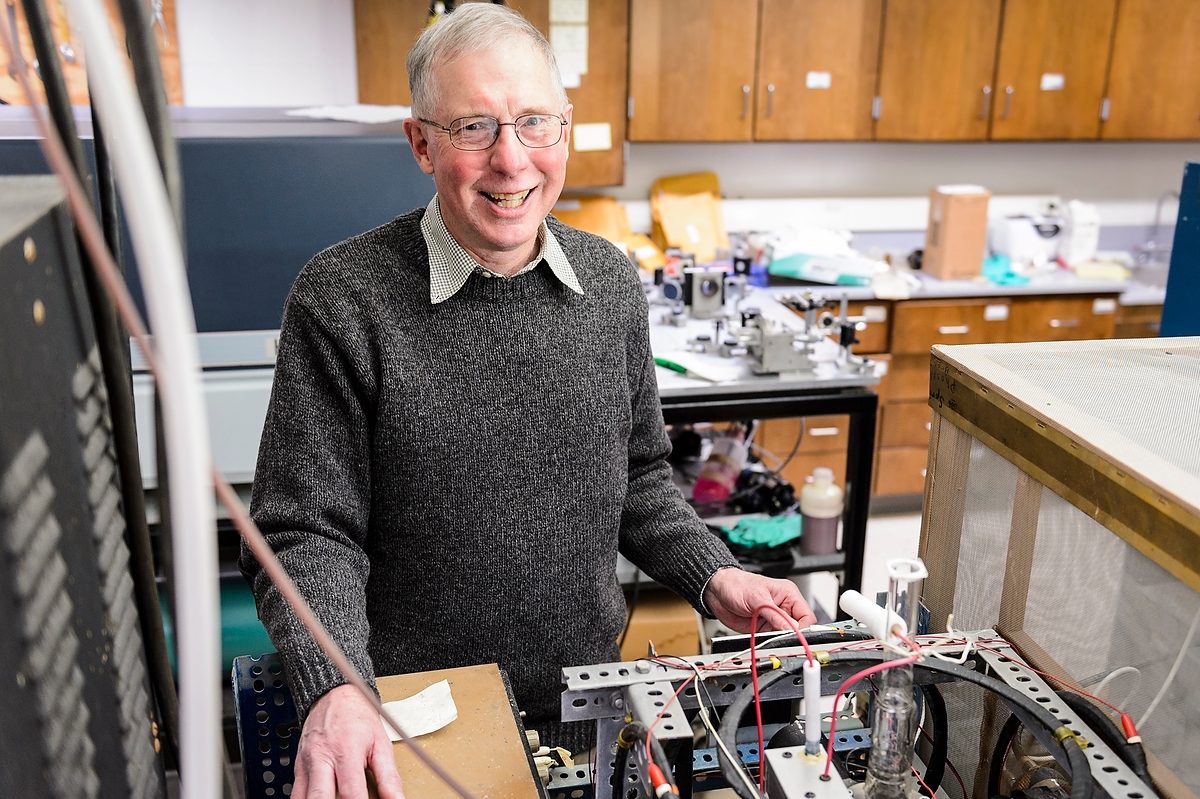 After 42 years on the UW–Madison faculty, Jim Lawler, the Arthur and Aurelia Schawlow Professor of Physics, has announced his retirement. Lawler is an atomic, molecular & optical physicist with a focus developing and applying laser spectroscopic techniques for determining accurate absolute atomic transition probabilities. His retirement is official as of May 22.

“What we’ve really done gradually over four-plus decades is make atomic spectroscopy more quantitative so that people can use it to really learn the detailed physics and chemistry of the remote universe,” Lawler says.

Lawler received his MS (’74) and PhD (’78) from this department, studying with now-professor emeritus Wilmer Anderson. In the two years after earning his doctorate, he was a research associate at Stanford University, and returned to UW–Madison as an assistant professor in 1980.

“There was a little bit of a disadvantage to come back to a place where I had recently been as a student,” Lawler says. “But I knew I would get extremely good graduate students and I would have access to a lot of infrastructure, and that combination really drew me back.”

Lawler served as department chair from 1994-1997. He also accumulated numerous awards and honors over his distinguished career. He is a fellow of the American Physical Society, the Optical Society of America, the U.K. Institute of Physics, and in 2020 he was elected a Legacy Fellow of the inaugural class of American Astronomical Society Fellows. He won the 1992 W. P. Allis Prize of the American Physical Society and the 1995 Penning Award from the International Union of Pure and Applied Physics for research in plasma physics, the two highest National and International Awards in the field of Low Temperature Plasma Physics. In 2017, he won Laboratory Astrophysics Prize of the American Astronomical Society for research in spectroscopy.

“He was a very good graduate student, and he of course has turned out to be a really great scientist and colleague. His lifetime measurements on atomic physics played a key role in understanding the neutron star collisions. I’m sorry to see him retiring but I’m sure that he will leave a legacy behind that’s really fantastic. It’s going to be a big loss to the department not to have him around.”

Lawler has collaborated with his AMO colleagues over the years, but in more of an intellectual capacity than in research. As he notes, much of AMO is headed in the quantum information and quantum computing direction, with public and private funding helping to drive it. Still, he does not see AMO headed solely in the quantum direction.

“Decades from now the currently Hot areas of physics will be less glamorous, but those stars are still going to be light years away,” Lawler says. “I think the connection of astronomy and spectroscopy — the way we learn about the physics and chemistry of the remote universe — is strong enough that it will survive. And helping make spectroscopy in astronomy more quantitative is what we’ve done that will have some lasting significance.”