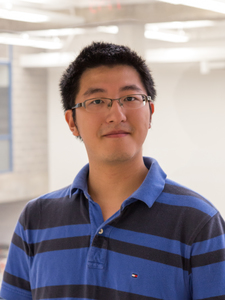 This story, by Meghan Chua, was originally published by the Graduate School

In 2012, scientists at CERN’s Large Hadron Collider announced they had observed the Higgs boson particle, verifying many of the theories of physics that rely on its existence.

Since then, scientists have continued to search for the properties of the Higgs boson and for related particles, including an extremely rare case where two Higgs boson particles appear at the same time, called di-Higgs production.

“We’ve had some searches for di-Higgs right now, but we don’t see anything significant yet,” said Alex Wang, a PhD student in experimental high energy physics at UW­–Madison. “It could be because it doesn’t exist, which would be interesting. But it also could just be because, according to the Standard Model theory, it’s very rare.”

Wang will have a chance to aid in the search for di-Higgs production in more ways than one. Starting in November, he will spend a year at the SLAC National Accelerator Laboratory as an awardee in the Department of Energy Office of Science Graduate Student Research Program.

The program funds outstanding graduate students to pursue thesis research at Department of Energy (DOE) laboratories. Students work with a DOE scientist on projects addressing societal challenges at the national and international scale.

At the SLAC National Accelerator Laboratory, Wang will primarily work on hardware for a planned upgrade of the ATLAS detector, one of the many detectors that record properties of collisions produced by the Large Hadron Collider. Right now, ATLAS collects an already massive amount of data, including some events related to the Higgs boson particle. However, Higgs boson events are extremely rare.

In the future, the upgraded High-Luminosity Large Hadron Collider (HL-LHC) will enable ATLAS to collect even more data and help physicists to study particles like the Higgs boson in more detail. This will make it more feasible for researchers to look for extremely rare events such as di-Higgs production, Wang said. The ATLAS detector itself will also be upgraded to adjust for the new HL-LHC environment.

“I’m pretty excited to go there because SLAC is essentially where they’ll be assembling the innermost part of the ATLAS detector for the future upgrade,” Wang said. “So, I think it’s going to be a really central place in the future years, at least for this upgrade project.”

Increasing the amount of data a sensor collects can also cause problems, such as radiation damage to the sensors and more challenges sorting out meaningful data from background noise. Wang will help validate the performance of some of the sensors destined for the upgraded ATLAS detector.

“I’m also pretty excited because for the data analysis I’m doing right now, it’s mainly working in front of a computer, so it will be nice to have some experience working with my hands,” Wang said.

At SLAC, he will also spend time searching for evidence of di-Higgs production.

Wang’s thesis research at UW–Madison also revolves around the Higgs boson particle. He sifts through data from the Large Hadron Collider to tease out which events are “signals” related to the Higgs boson, versus events that are “backgrounds” irrelevant to his work.

One approach Wang uses is to predict how many signal events researchers expect to see, and then determine if the number of events recorded in the Large Hadron Collider is consistent with that prediction.

“If we get a number that’s consistent with our predictions, then that supports the existing model of physics that we have,” Wang said. “But for example, if you see that the theory predicts we’d have 10 events, but in reality, we see 100 events, then that could be an indication that there’s some new physics going on. So that would be a potential for discoveries.”

The Department of Energy formally approved the U.S. contribution to the High-Luminosity Large Hadron Collider accelerator upgrade project earlier this year. The HL-LHC is expected to start producing data in 2027 and continue through the 2030s. Depending on what the future holds, Wang may be able to use data from the upgraded ATLAS detector to find evidence of di-Higgs production. If that happens, he also will have helped build the machine that made it possible.