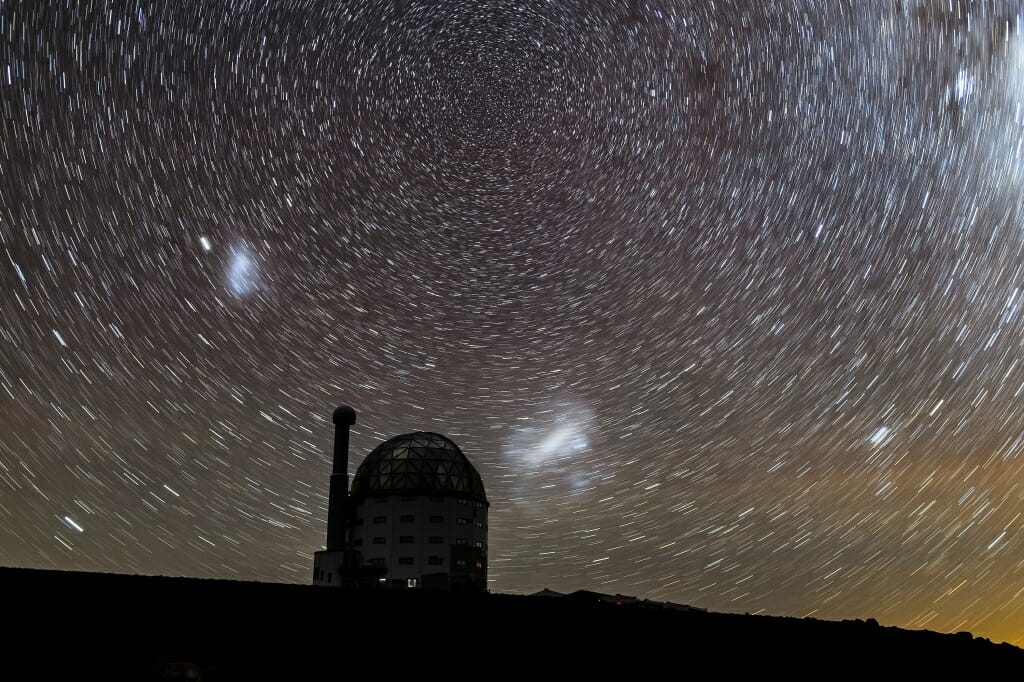 This story was originally posted by UW–Madison News

Two dwarf galaxies circling our Milky Way, the Large and Small Magellanic Clouds, are losing a trail of gaseous debris called the Magellanic Stream. New research shows that a shield of warm gas is protecting the Magellanic Clouds from losing even more debris — a conclusion that caps decades of investigation, theorizing and meticulous data-hunting by astronomers working and training at the University of Wisconsin–Madison.

The findings, published recently in the journal Nature, come courtesy of quasars at the center of 28 distant galaxies. These extremely bright parts of galaxies shine through the gas that forms a buffer, or corona, that protects the Magellanic Clouds from the pull of the Milky Way’s gravity.

“We use a quasar as a light bulb,” says Bart Wakker, senior scientist in UW–Madison’s Astronomy Department. “If there is gas at a certain place between us and the quasar, the gas will produce an absorption line that tells us the composition of the clouds, their velocity and the amount of material in the clouds. And, by looking at different ions, we can study the temperature and density of the clouds.”

The temperature, location and composition — silicon, carbon and oxygen — of the gases that shadow the passing light of the quasars are consistent with the gaseous corona theorized in another study published in 2020 by UW–Madison physics graduate student Scott Lucchini, Astronomy professors Elena D’Onghia and Ellen Zweibel and UW–Madison alumni Andrew Fox and Chad Bustard, among others.

“Our first Nature paper showed the theoretical developments, predicting the size, location and movement of the corona’s gases,” says Fox, now an astronomer at the Space Telescope Science Institute and, with Lucchini, a co-author of both studies.

The new discovery is a collaboration with a team that includes its own stream of former UW–Madison researchers pulled out into the world through the 1990s and 2000s — former graduate students Dhanesh Krishnarao, who is leading the work and is now a professor at Colorado College, David French, now scientist at the Space Telescope Science Institute, and Christopher Howk, now a professor at the University of Notre Dame — and former UW–Madison postdoctoral researcher Nicolas Lehner, also a Notre Dame professor.

UW–Madison research leading to the new discovery dates back at least to an inkling of hot gases seen in a study of stars in the Magellanic Cloud published in 1980 by the late astronomy professor Blair Savage and his then-postdoc Klaas de Boer.

“All that fell into place to allow us to look for data from the Hubble Space Telescope and a satellite called the Far Ultraviolet Spectroscopic Explorer, FUSE — which UW also played an important role in developing,” Wakker says. “We could reinterpret that old data, collected for many different reasons, in a new way to find what we needed to confirm the existence of a warm corona around the Magellanic Clouds.”

“We solved the big questions. There are always details to work out, and people to convince,” D’Onghia says. “But this is a real Wisconsin achievement. There aren’t many times where you can work together to predict something new and then also have the ability to spot it, to collect the compelling evidence that it exists.”